EVERYTHING WILL BE FINE! Rinat Akhmetov Foundation and TSUM Kiev, with the support of the Ministry of Health of Ukraine, have joined the global flash mob

Bright posters with life-affirming slogans appeared on the windows of the central store in Kiev. Thus, the Rinat Akhmetov Foundation, together with TSUM Kiev, with the support of the Ministry of Health of Ukraine, joined the global flash mob “EVERYTHING WILL BE FINE!” The posters complement the rules that must be followed during quarantine.

Adapting to life under extreme quarantine measures and being isolated, Italians were the first to unite in the inspiring “Andra’ tutto bene! Movement”. On the windows of Italian shops, posters appeared which depicted a rainbow palette with the slogan of a flash mob. The positive wave quickly spread to Spain – “Todo va a salir bien!” and to France, where, as part of a social initiative, parents and children together drew posters with the words “Ca va bien aller!” and place them on their windows and balconies. 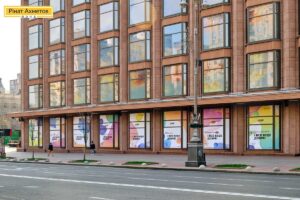 “The Rinat Akhmetov Foundation has joined the fight against coronavirus in Ukraine from the first days. Back in February, when the world did not realize the scale of the tragedy, we began to support the healthcare system by purchasing equipment, test systems, and personal protective equipment, primarily for doctors. Then there was a contribution to the adaptation of the education system to distance learning, a series for teachers and students. And after that we take the third, but very important step. Together with the TSUM team, we tell you that if you follow the rules that were developed with the support of the Ministry of Health, the quarantine will end faster. The bearers of this set of rules were the windows of the country’s main mall on Khreshchatyk Street . This vibrant, juicy, spring company says there are literally eight easy steps to a positive response to the virus: stay home, work from home, study from home, shop online, practice basic hygiene, and you will be fine! The epidemic will end, we will come out of quarantine and return to normal life,” comments Natalya Yemchenko, member of the Supervisory Board of the Rinat Akhmetov Foundation.

Rinat Akhmetov Foundation, together with the Kiev TSUM encourages local businesses and retailers to join the flash mob, and Ukrainians share their good news and pleasant moments in social networks with hashtag #vsebudedobre.

A quadripartite Memorandum between the Ministry of Health of Ukraine, the Rinat Akhmetov Foundation, TSUM Kiev and the Institute of Cognitive Modeling was signed on April 13, 2020. The purpose of the Memorandum is to ensure the maximum efficiency of events and activations within the framework of communication on COVID-19.

As part of the fight against COVID-19, the Rinat Akhmetov Foundation is carrying out large-scale work.

Purchased for the whole country 300 thousand rapid tests for coronavirus. They have already been transferred to the Stabilization Fund, initiated by the President of Ukraine, and have now entered the regions.

Rinat Akhmetov sent 300 million UAH to fight COVID-19. For this, he combined all the resources – the charitable Foundation, FC Shakhtar, DTEK, Metinvest and other SCM assets to help Ukraine.

On April 17, the Rinat Akhmetov Foundation purchased a QuantStudio™ 5 coronavirus sample analyzer for the Mariupol branch of the Donetsk Regional Laboratory Center of the Ministry of Health of Ukraine. This is one of the most modern devices of its class, equipped with a test system and a biosafety box. This box completely isolates physicians from all infections transmitted by airborne droplets.

Previous Post Ukrainians called Metinvest the best employer of the mining and metallurgical complex Next Post How do ALV apparatus work? Educational series for doctors and patients from the Rinat Akhmetov Foundation