Today Kiev received 25,000 rapid tests to detect coronavirus. This is part of the 300,000 tests donated to the country by the Rinat Akhmetov Foundation as part of the national campaign to combat the COVID-19 epidemic. The capital’s medical institutions – hospitals, primary health care centers, and maternity hospitals, will receive them. 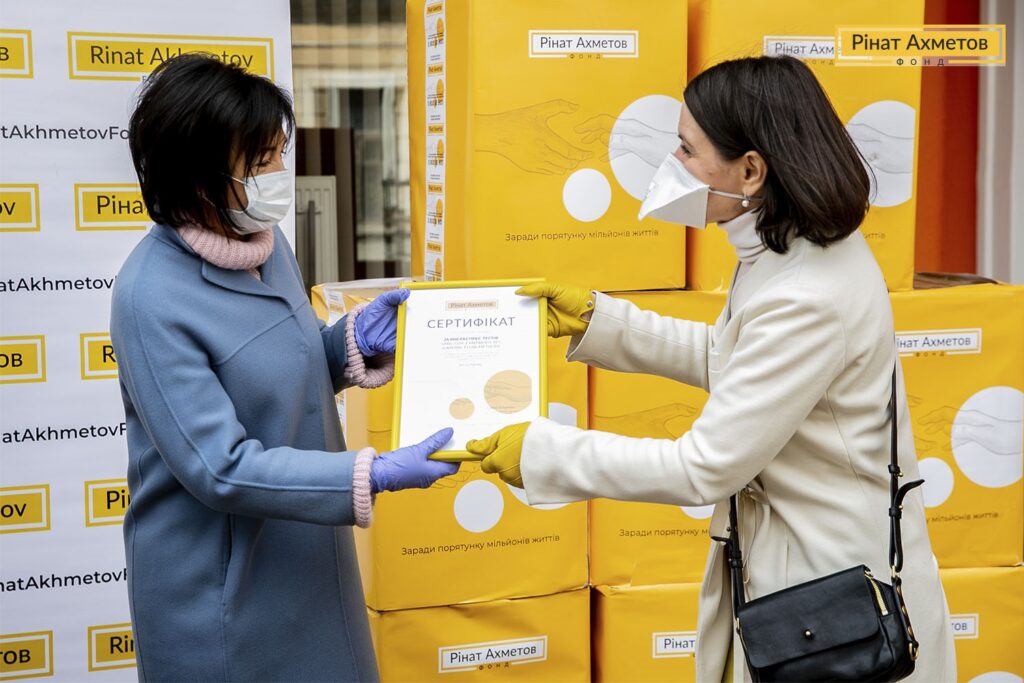 – Coronavirus is a nationwide problem. Every Ukrainian is under threat today. However, there are regions where the epidemic is growing faster than in the country as a whole. Moreover, Kiev is among them. More than 15% of the total number of Ukrainians infected with coronavirus live in the capital. Tests that are being passed to doctors will help quickly screen people from risk groups, primarily those with COVID symptoms, isolate and treat those who are sick, so as not to spread the virus. In total, Rinat Akhmetov sent UAH 300 million to fight the epidemic, – said Natalya Yemchenko, a member of the Supervisory Board of Rinat Akhmetov Foundation.

Accepting the certificate on the charitable transfer of 25,000 express tests, the director of the health department of the Kyiv City State Administration Valentina Ginzburg thanked Rinat Akhmetov Foundation for its contribution to the fight against coronavirus and noted how important the express diagnostics of coronavirus in the capital is.

– I want to thank the Rinat Akhmetov Foundation. The city of Kiev was the first in the country to start making rapid tests for patients, and now such assistance from the Fund will allow each medical institution to increase the number of tests. The coronavirus epidemic is a worldwide disaster, and I hope this is not the last help from the Fund, Valentina Ginzburg said.

She also noted that today doctors around the world recognize that it is necessary to connect a patient to a ventilator only in a critical condition. Therefore, early detection and treatment play a key role not only in the spread of coronavirus, but also in the successful treatment of those infected.

25,000 tests will be distributed among the hospitals in Kiev, as well as – most importantly – they will be received by outpatient clinics and maternity hospitals. 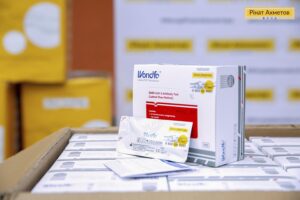 The head physician of the Kiev city maternity hospital No. 5 Dmitry Govseev thanked the Rinat Akhmetov Foundation and told how the capital takes care of the health and safety of newborn Kiev residents, their mothers, as well as women who are preparing to become mothers.

– Thanks to the Foundation for the “express tests”. We were the first to start make testing. An effective logistic system for testing pregnant women and other patients has been created in Kiev. The seemingly high figure of the number of infected simply shows the real situation, since many people are being tested, – said Dmitry Govseev

– Express tests are done by mobile teams that conduct research at patients’ homes. This makes it possible to timely identify and hospitalize the sick, which in turn helps to protect other people, including doctors, from the threat of infection. Therefore, many thanks to the Fund for such cooperation, – said Valentina Reif.

Kiev became the eighth region of Ukraine to receive diagnostic tests from the Foundation. Previously, such tests were transferred to state hospitals in Lviv, Kharkov, Donetsk, Lugansk, Zaporizhzhia, Ivano-Frankivsk and Dnepropetrovsk regions. 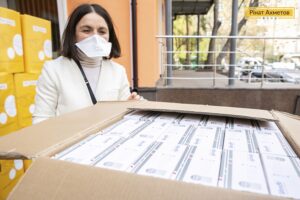 Previous Post Rinat Akhmetov Foundation and Metinvest provided Kryvyi Rih with tests to diagnose COVID-19 Next Post Information for the mass media. Disproof of fake information about explosion in Zaporizhstal