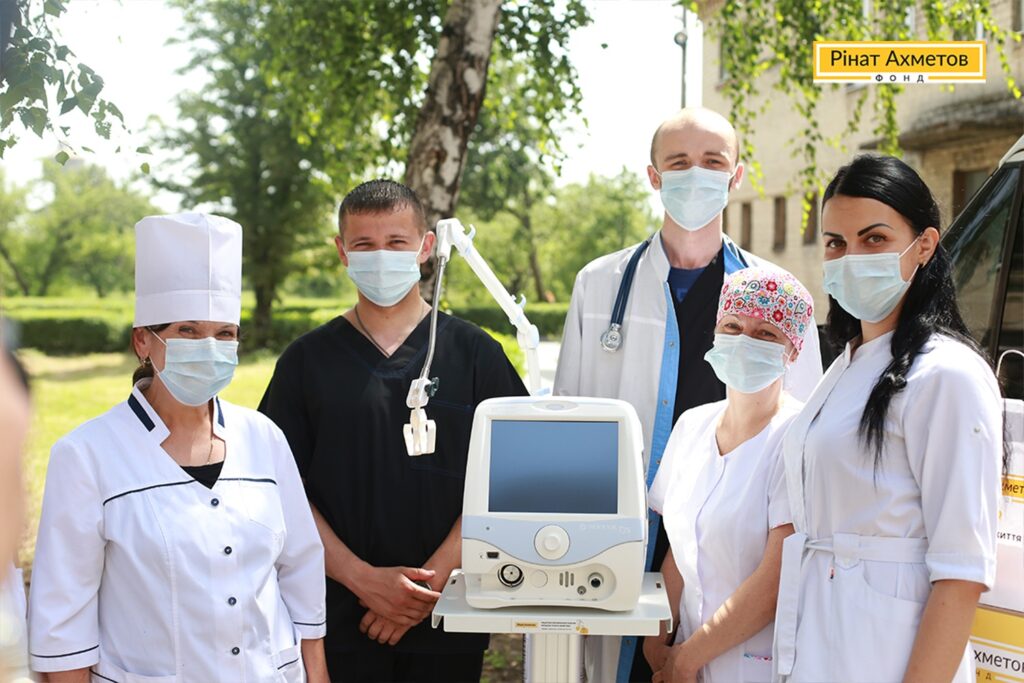 According to her, 32 lung ventilators are transferred to state healthcare institutions in six regions. This is the largest batch that crossed the Ukrainian border since the beginning of quarantine.

The representative of SCM, Aleksandr Vishnyakov, handed over the certificate for lung ventilator to Ekaterina Vishnevskaya, the head physician of the hospital.

“This is an upscale equipment that is difficult to purchase, because of the pandemic, it is required in every country in the world. On behalf of the Founder of the Foundation, Rinat Akhmetov, I want to once again thank the doctors,” said Aleksandr Vishnyakov.

In turn, Ekaterina Vishnevskaya told why this particular assistance of the Foundation remains extremely relevant:

– We express our deep gratitude by the whole team. Lung ventilators will allow us to fully provide medical care to patients with identified pathology, timely respond to changes in their condition. 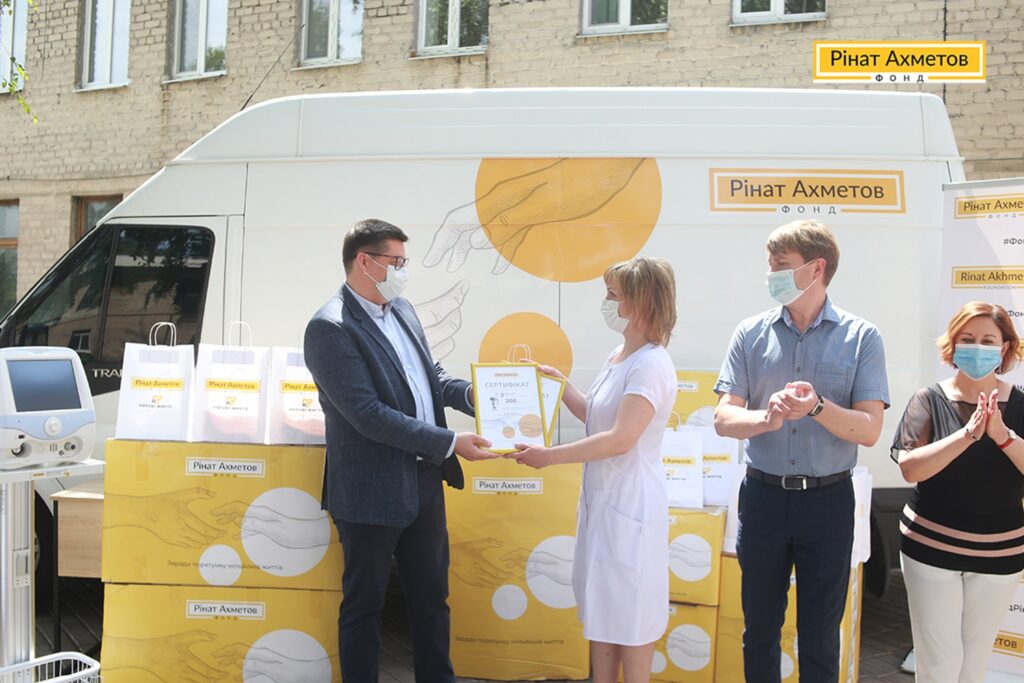 According to Mayor of Myrnograd Aleksandr Brykalov, assistance from Rinat Akhmetov Foundation for the region comes at the right time:

– Since childhood, we hear the phrase – a friend in need is a friend indeed, and with age, we are convinced of its truth. Today’s event is proof of this. When trouble came to Ukraine, the doctors were not left alone with this problem. Our friends help and give them such scarce and relevant equipment, which is now necessary to save the inhabitants of all Ukraine. Thank you so much for that!

Marina Korneyeva, deputy head of the health department of the Donetsk regional state administration, supported the words of the mayor of Mirnograd.

– A huge role in providing high-quality medical care is played by modern medical equipment, such as lung ventilators. They are intended for the treatment of patients with severe diseases. In these difficult times, many humanitarian organizations help our hospitals. However, the most significant and unprecedented assistance is provided by Rinat Akhmetov Foundation. Lung ventilators for Donetsk region from the Foundation is the most significant contribution to the modernization of hospitals in the region. On behalf of the Department of Health, I express my deep gratitude, – added Marina Korneeva.

In addition, Alexander Vishnyakov, on behalf of the Foundation, presented three anesthetists of the Myrnograd Infectious Disease Hospital with certificates of completion of a special course that teaches working with the most advanced models of mechanical ventilation devices. Rinat Akhmetov Foundation together with the Ministry of Health and the Association of Anesthetists of Ukraine organized it. Leading experts of the Ministry of Health have shared with the doctors of state medical institutions the best international experience in the treatment of COVID-19 and the nuances of working with the latest models of mechanical ventilation. More than 800 doctors from all over Ukraine participated in online training from the Foundation. 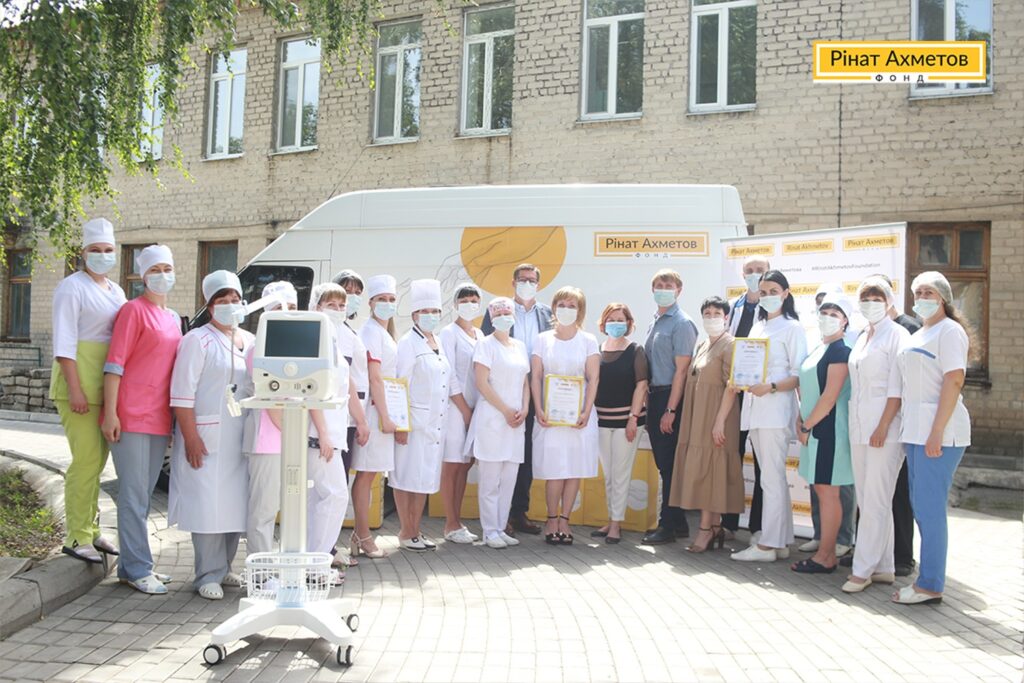 – Thank you very much for conducting online training, thanks to which I managed to get a lot of valuable and useful information for our work. I gained new knowledge and adopted the experience of the best specialists of Ukraine, -said Yulia Tokar, the doctor.

At the end of the event, the doctors of Myrnograd infectious diseases hospital received a special gift from the Foundation – certificates for a set of medical work wear. Doctors will be able by QR-code to select the required clothing sizes, which will be sewn for them upon special order.

As reported, doctors from Lviv, Ivano-Frankivsk, Kramatorsk, Konstantinovka and Bakhmut and others received lung ventilators from Rinat Akhmetov Foundation. Altogether, 200 pieces of the most modern models of this equipment will be transferred to state healthcare institutions.

“Fighting COVID-19 in Ukraine” is a large-scale project of the Foundation, designed to help save lives. It is implemented under the program “Rinat Akhmetov – Saving Lives.” Earlier, by personal decision of Rinat Akhmetov, the project “200 ambulances for Ukraine” was implemented as part of this program. Then, in a record-breaking short half a year, state-owned medical institutions in all regions received 200 special vehicles with the most advanced equipment, capable of overcoming off-road conditions. Including 22 cars with lung ventilators for newborns. This is the largest contribution of one supporter to the state medicine of Ukraine for the entire time of independence of our country. Today, many of these ambulances are involved in the fight against the epidemic in all regions.