The Rinat Akhmetov Foundation has become one of five finalists of the prestigious international CSR & Nonprofit Awards. The awards ceremony was supposed to take place last year in New York, but due to the coronavirus epidemic, it was cancelled and the statuettes were sent to the winners by mail. The award arrived in Ukraine only at the end of January. The Foundation was recognized for the social campaign “Donbass and the Peaceful”, which included the book of the same name and a series of videos, video monologues “War through the Eyes of Children”, theatrical production of the book, photo exhibitions all over the country and a mural at a house in Mariupol. It depicts Milana Abdurashitova, a girl who survived the shelling of the Vostochny neighborhood in 2015. 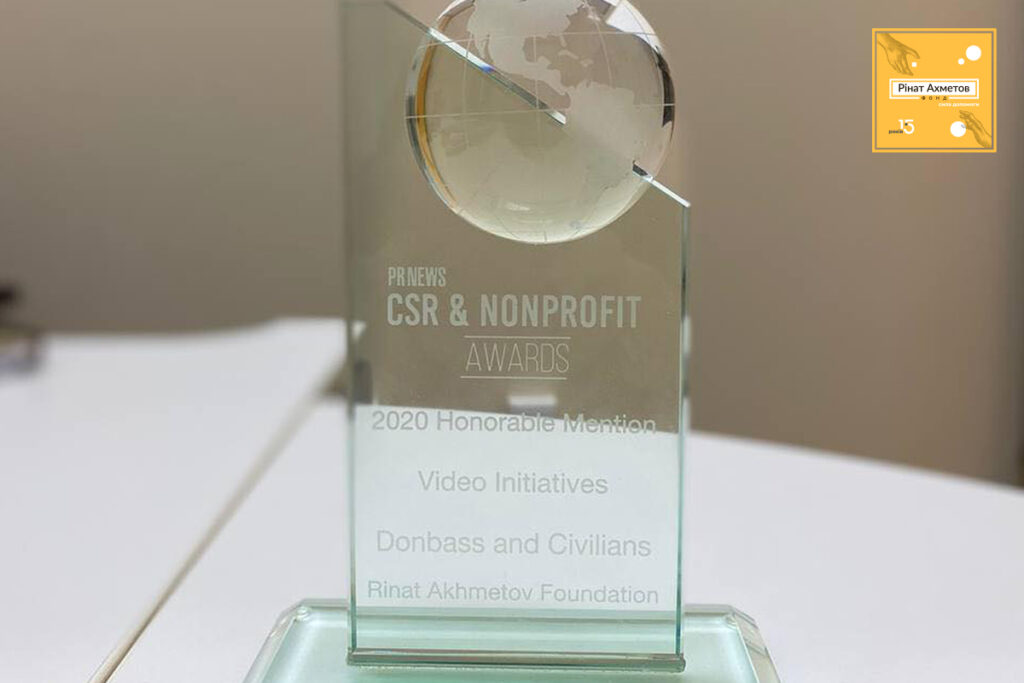 – The social campaign “Donbass and the Peaceful people” is based on the stories of ordinary people, whose life after the beginning of the armed conflict was divided into before and after. These are stories of children and adults who learned to live anew. They lost loved ones, lost all their property overnight, hid from shelling, lived in basements. They survived and more than anything else they dream that peace has finally come to Donbass. It is very important that those stories are known and remembered. We are proud that thanks to the campaign we managed to attract the attention of the world community to the problem of peaceful Donbass, – says Yulia Yershova, Director of Communications of the Rinat Akhmetov Foundation.

The CSR & Non-profit Awards have been presented in Washington DC since 2009. Every year the jury examines non-profit initiatives and examples of high corporate social responsibility from around the world. The most outstanding ideas and solutions that change society and the world for the better come to the final. Over the years, UNICEF, Steven Spielberg’s Holocaust Victims Fund, Johnson & Johnson’s, Procter & Gamble and others have become winners and finalists of the CSR & Non-profit Awards.

Today, the Fund continues to tell the world about the tragedy of Donbass. For this, the online museum “Voices of the Peaceful People” was created. The main task of the museum is to objectively and fully document the testimonies of civilians who suffered as a result of the armed conflict in Donbass. Today, the Museum of the Rinat Akhmetov Foundation is the largest collection of those stories in Ukraine. If the conflict also affected you, go to https://civilvoicesmuseum.org/ru/my-story  and fill out a short questionnaire to contribute to memory preservation.