Save Millions of Lives: Ambulances of the Rinat Akhmetov Foundation Help Ukrainian Doctors

The coronavirus epidemic has shown how much Ukrainian medicine needs support. However, emergency medical services in all regions of Ukraine met a threat with more preparedness, because they became participants in the large-scale project “200 ambulances for Ukraine”. 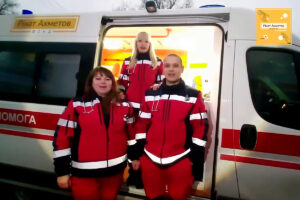 – The project “200 ambulances for Ukraine” by the Rinat Akhmetov Foundation was implemented in 2019 and increased the level of emergency assistance in the country. In a record short six months, state medical institutions in all regions received 200 special vehicles with the most modern equipment capable of overcoming off-road conditions. Including 22 cars with artificial  lung ventilation devices. Today, many of these ambulances are involved in the fight against the epidemic in all areas. On average, medical teams in Foundation vehicles can save up to a million lives every year, ”said Natalya Yemchenko, member of the Foundation’s Supervisory Board.

Fonda’s ambulance has already become a loyal friend for the doctors of the Khortytska ambulance station in Zaporizhiazh. A medical team on this car is now confronting the coronavirus epidemic. A state-of-the-art machine plays a big role when the minute counts.

– Delay can lead to patient disability. If help is provided in the first hour, the consequences can be minimal. At the same time, 2-3 calls can be received in an hour, – says senior paramedic Irina Molchanova.

Doctors state that the Foundation ambulances are not just modern transport, but a real mobile hospital ward.

“Thanks to the help of Rinat Akhmetov, we have replaced the old Gazelle with a new, comfortable and equipped car. Thank you for hearing us, helping, and now we are quickly saving people’s lives, – thanked the head of the substation Anatoly Sidorenko and his colleague Irina Molchanova. 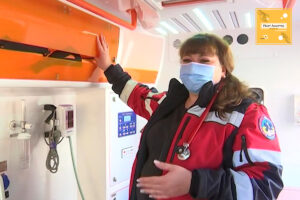 The project “200 ambulances for Ukraine” is not only saving lives, but also an opportunity to improve the professional skills of young doctors.

– The car, which was provided by the Rinat Akhmetov Foundation, is equipped with modern technology. On his account, together with a team of doctors, more than a dozen lives were saved, ” explained Valery Zuiko, head of the Sloviansk ambulance station.

Rinat Akhmetov instructed the Fund to supply doctors with the best special vehicles, and this task was successfully implemented in record time. “200 ambulances for Ukraine” is a national project. For the first time, state healthcare institutions received supermodern special vehicles of this level. The project has changed the quality of emergency and primary health care. And doctors in all regions of the country were able to help people faster and more efficiently. The new ambulances of the Rinat Akhmetov Foundation are a million trips a year to where rescue awaits. These are millions of lives saved.