– The Foundation has purchased 200 high-end lung ventilators for Ukraine. Small regional hospitals are particularly in need of this equipment. Such modern devices make it possible to provide assistance to patients with severe complications from coronavirus. 32 pieces of equipment were delivered to the country in early June. This is the largest batch of ventilators imported into Ukraine after the start of quarantine. The devices were distributed between the supporting state hospitals in Lviv, Ivano-Frankivsk, Donetsk, Dnipropetrovsk and Lugansk regions, as well as Kharkov, – said Natalya Yemchenko, member of the Supervisory Board of Rinat Akhmetov Foundation.

Sergey Gayday, the Chairman of Lugansk Regional State Administration, thanked Rinat Akhmetov Foundation for supporting the healthcare system and noted that Starobelsk is a special city for the region:

– This is the center of Luhansk region. From all the remote places, the patients will be brought here. Our task is to provide doctors with everything they need. Rinat Akhmetov Foundation donates such lung ventilators that our medicine needs. Thanks for this help. It arrived very timely. It is impossible to overestimate it, because it is impossible to evaluate the life or health of people who will be helped by this device. The Foundation and all the doctors who work here, deepest gratitude.

Vitaly Shevchenko, DTEK representative, spoke about the social responsibility of SCM businesses and recalled that Rinat Akhmetov’s help in the fight against coronavirus began to arrive even before the epidemic: 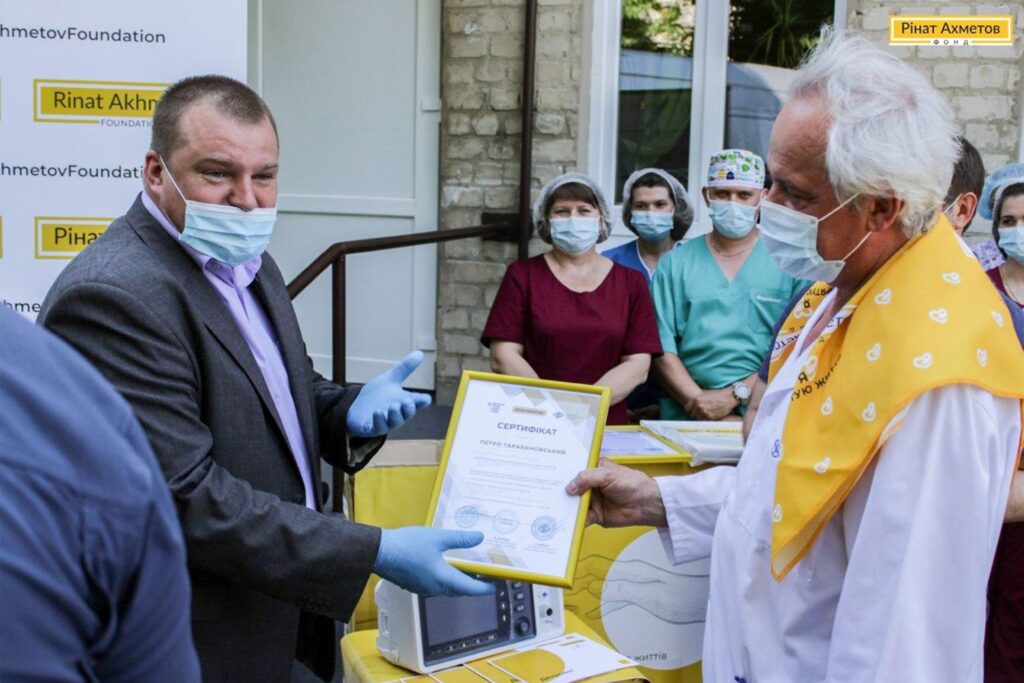 – In April, Rinat Akhmetov Foundation handed over 30 thousand express tests for the diagnosis of coronavirus to Luhansk region. In May – 6 thousand protective suits for doctors, sanitizers, axiometers, heart rate monitors, personal protective equipment. Now the time has come for the transfer of lung ventilators – equipment that saves lives.

– We are grateful for the support. Now we are completely ready for work, for the second wave. This assistance will help us in our work, the region will be protected, – said Galina Gorbachenko, general director of the MNE “Starobelsk Regional Territorial Medical Association”.

The devices handed over to doctors by Rinat Akhmetov Foundation have a high level of automation and even suggest a mode of lung ventilation that is optimal for a particular patient. The online training organized by Rinat Akhmetov Foundation together with the Ministry of Health helped to master the nuances of working with equipment for doctors. The first webinar was attended by over 800 doctors from all over the country, among them there were doctors from Starobelsk.

In addition, the Foundation, together with the Ministry of Digital Transformation, created the training series “How Lung Ventilators Work”, which was viewed over 170,000 times.

Vitaliy Shevchenko also handed over certificates for medical clothing to doctors working with COVID in the intensive care unit. It will be sewn by special order, individually for each doctor.

“The fight against COVID-19 in Ukraine” is a large-scale project of the Foundation, designed to help save lives. It is implemented under the program “Rinat Akhmetov – Saving Lives.” Earlier, by personal decision of Rinat Akhmetov, the project “200 ambulances for Ukraine” was implemented as part of this program. Then, in a record-breaking short half a year, state-owned medical institutions in all regions received 200 special vehicles with the most advanced equipment, capable of overcoming off-road conditions. Including 22 cars with lung ventilators for newborns. This is the largest contribution of one supporter to the state medicine of Ukraine for the entire time of independence of our country. Today, many of these ambulances are involved in the fight against the epidemic in all regions.

Previous Post Experts discussed water resources conditions in Ukraine and use as an example the experience of Zaporizhstal Steel Works eco-modernization in reducing the discharge of industrial water into the river Dnieper Next Post #Thankdoctors: Rinat Akhmetov Foundation Urges All Ukrainians to Join the Flash Mob