The action “Rinat Akhmetov to Children”: The New Year miracle for the little ones.

A Pre-New Year relay race of miracles, presents and holidays continues in Ukraine within the scope of the action “Rinat Akhmetov to Children”. For more than 20 years, it has been focusing on children from boarding schools, family-type children’s homes, as well as on little and young participants in the Foundation programmes and projects. Only for the last 14 years, almost 1,000,000 children have received gifts and greetings from Ukraine most famous benefactor.

Rinat Akhmetov himself explains his philosophy of helping children in the following way: “Helping those in need cannot be postponed. We have been so taught that children are our future that we really believe in it. However, this is not true. Children are our present and we are responsible for their future.

This year, as part of the action, a special surprise was given to the educatees of the Staronikolayevskiy education and training complex (Donetsk region). The age of children is from three to six years. 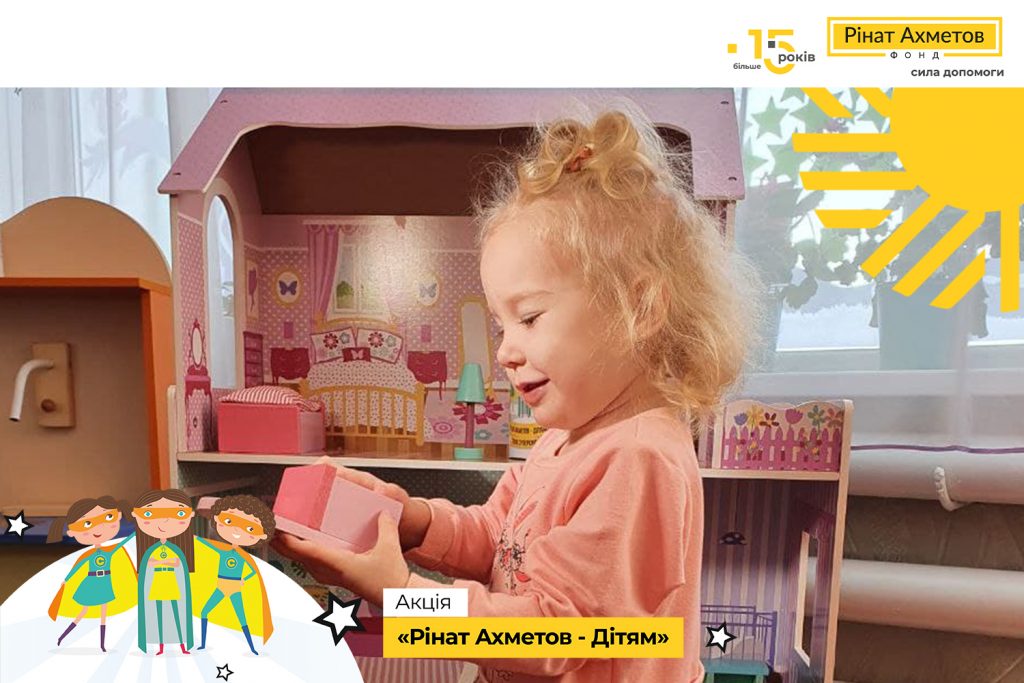 – Rinat Akhmetov Foundation continues to provide the atmosphere of kindness, miracle and magic to the children-educatees of family-type orphanages and boarding schools, as well as to the children participating in the programmes and projects of Rinat Akhmetov Foundation. The action “Rinat Akhmetov to Children” is a personal initiative of Rinat Akhmetov. This tradition is more than 20 years old. Over the years, its format has changed, but the goal and philosophy to give warmth and care to children remained unchanged. The action “Rinat Akhmetov to Children” is not just gifts for thousands of children, it is a touch to their fates that changes lives for the better and gives faith in a miracle,” said Oksana Ishchuk, the project manager of the Foundation.

A real kaleidoscope of gifts was waiting for the little ones. A furniture for children`s play area including a medical set “Aibolit” and a ready-built kitchen for little housewives was brought to them. Also the educatees of the institution got toy sets. There was a car set and garage for the young automobile fans, and a construction set and wooden house models for the little builders. And of course – tasty gifts!

– Many thanks to Rinat Akhmetov Foundation for such a pleasant pre New Year surprise. It was a great joy for the children – thanked the director of the complex, Inna Mih

The aim of the action “Rinat Akhmetov to Children” is much more than New Year greetings and gifts. Its continuation became a project “Rinat Akhmetov to Children. Your superpower” . This is a series of motivational meetings for the educatees of boarding schools in Donetsk region with the Foundation ambassadors – the superstars of the “Ukraine” channel, Rinat Akhmetov goodwill ambassadors. The youth idols show by their example that achieving the goal is quite a realistic task. Since December 2018, the Ambassadors have held 41 meetings in nine boarding schools in the Donetsk region, which have been attended by 1,065 children. The importance of such events is that boarding school educatees gain applicative knowledge that will help them in their adult lives. This year, the Foundation has also held a motivational and interactive online career guidance lesson for schoolchildren from all over Ukraine, entitled “Your super profession”.