Rinat Akhmetov was the first in the country to respond to the threat of an epidemic and sent 300 million UAH to fight COVID-19 in Ukraine. To do this, he combined all the resources – the charitable foundation, FC Shakhtar, DTEK, Metinvest and other SCM assets. 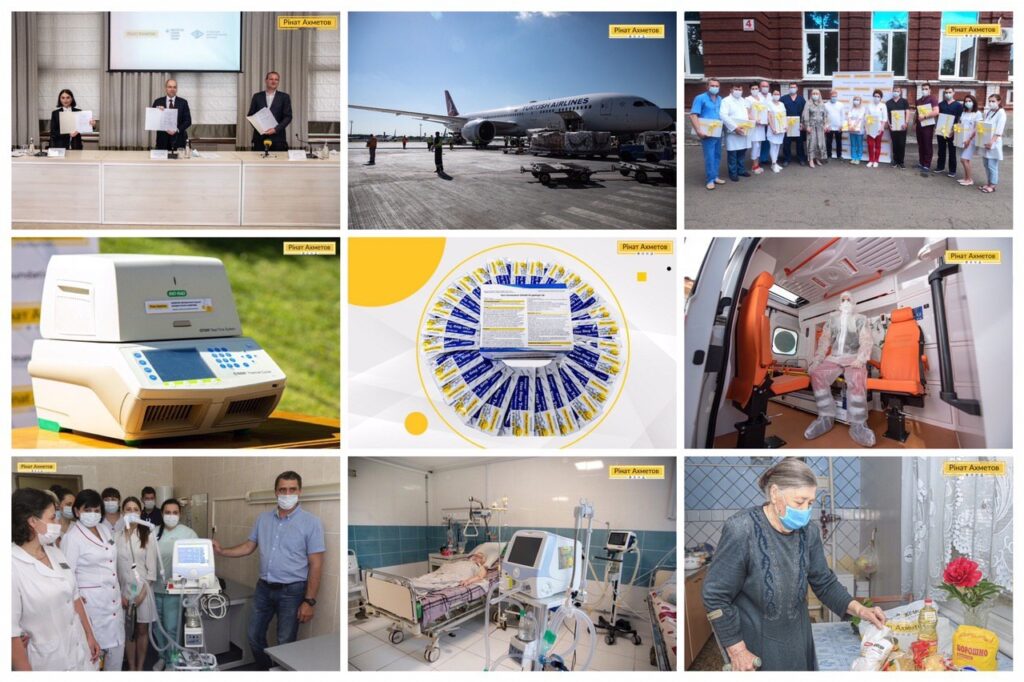 The Foundation works in close coordination with the Ministry of Health of Ukraine, regional anti-crisis headquarters to combat coronavirus and helps state hospitals with the most essential. Equipment, express tests, personal protective equipment are being handed over to doctors within the framework of the Fight against COVID-19 in Ukraine project, which has become part of the large Rinat Akhmetov – Saving Lives program.

You can read about the assistance the country received from the Rinat Akhmetov Foundation in February-April 2020 here. A far from complete list of assistance provided by the Fund in May-June is in this material.

On April 30, the Foundation donated a specialized thermostat TDB-120, as well as a D2012 PLUS centrifuge and a CM-8 MICROMED shaker to the laboratories of the Mariupol branch of the Donetsk Regional Laboratory Center of the Ministry of Health of Ukraine. This equipment allowed Mariupol doctors to independently carry out the entire cycle of analyzes and quickly obtain high-precision results. Earlier, the Rinat Akhmetov Foundation donated a QuantStudio™ 5 sample analyzer complete with a test system and a biosafety box to this laboratory.

On the same day, the Fund, together with the Parallel Company, donated fuel to the I.K Matsuk Mariupol City Hospital No. 4. Previously, gas, gasoline and diesel fuel were provided to other state medical institutions in Mariupol, Konstantinovka, Kurakhovo, Volnovakha, Lisichansk, Severodonetsk, Novopskov and Novoaydar.

On May 4, another shipment of express tests for the detection of the COVID-19 virus arrived in Ukraine. This time, Rinat Akhmetov Foundation brought a batch of test kits to check coronavirus for doctors working in the ambulance service. 20,000 diagnostic kits were distributed between the emergency regional centers in Chernivtsi, Ivano-Frankivsk, Ternopil, Rovno, Vinnitsa, Lvov and Zhitomir.

On May 5, Rinat Akhmetov Foundation, together with the Ukraine TV channel, launched a special project #DyakuyemoMedykam. As part of the action, stories of doctors were told throughout the country, whose exploits often go unnoticed – they were filmed and told on social networks.

On May 6, the Fund, together with the FUIB bank, handed over 5,000 sets of medical clothing to the doctors of Ternopil. The head of the Ternopil Regional State Administration, Volodymyr Trush, said that the costumes were distributed among the main hospitals of the entire region.

On May 7, the Centers for Emergency Medicine in Lvov and Ivano-Frankivsk received diagnostic materials from the Foundation for testing coronavirus. On May 12, Ternopil and Vinnitsa received test systems for testing doctors, on May 13 – Chernivtsi, on May 15 – Zhytomyr and Rivne.

On May 13, the Dnipropetrovsk Regional Laboratory Center of the Ministry of Health of Ukraine received from the Rinat Akhmetov Foundation and DTEK a modern American-made PCR test analyzer and an uninterruptible power supply, which will ensure the functioning of the device even in the event of emergency power outages.

On the same day, the Glybotsk central regional hospital (Chernivtsi region) received a modern ventilator from the Foundation and a patient monitor for it.

On May 15, the Foundation donated a large consignment of personal protective equipment to doctors in Donbass. Doctors in Konstantinovka, Kramatorsk, Marinka, Mirnograd, Toretsk, Slavyansk, Belovodsk and Severodonetsk received protective masks, surgical aprons, caps, protective screens, sanitizers and oximeters. On May 16, similar assistance was transferred to doctors in Volnovakha, Pokrovsk, Rubezhny, Starobelsk, and Lisichansk.

On May 19, the Foundation signed a memorandum of cooperation with the Ministry of Health of Ukraine and the Association of Anesthesiologists. The parties agreed to launch online training for physicians working with artificial lung ventilation ALV. The first online conference took place on May 21. More than 800 doctors from all over the country took part in it. Earlier, the series “How AVL ventilators work” was shot together with the Ministry of Digital Transformation.

During the second half of May, the Rinat Akhmetov Foundation, together with DTEK and Metinvest, handed over 10,000 food packages to labor veterans in the Donetsk and Lugansk regions. The delivery of products was carried out in a contactless way, in compliance with all the necessary quarantine regulations.

On June 2, the Rinat Akhmetov Foundation and the Ministry of Social Policy of Ukraine signed a Memorandum on joining efforts to popularize and intensify national adoption and the development of family forms of upbringing under quarantine conditions. The first joint project will be a video course “Getting ready to take a child.”

On the same day, June 2, a cargo plane arrived at the Boryspil airport and delivered 32 more out of 200 ventilators to Ukraine, purchased by the Fund for the country’s state hospitals. This is the largest batch that has crossed the Ukrainian border since the beginning of the quarantine.

On June 6, six AVL were handed over by the Foundation, together with DTEK, to doctors in the Lviv region.

On June 10, the Bakhmut multidisciplinary intensive care hospital received a modern artificial lung ventilation device. The head physician of the medical institution, Svetlana Melnikova, said that equipment of this class arrives in Bakhmut for the first time:

– Our hospital is recognized as a supporting institution. This is a great responsibility. We are obliged to provide quality medical care. This requires qualified personnel and modern equipment. We have 25 ventilators, but they are of the middle class. I express my gratitude to the Rinat Akhmetov Foundation from the entire team. This machine will help save lives.

On the same day, Ivano-Frankivsk region received three ventilators from the Fund and two from Kramatorsk. Larisa Volovikova, deputy chief physician of the Kramatorsk City Hospital No. 3, told how the doctors were waiting for this equipment.

On the same day, the Rinat Akhmetov Foundation donated two artificial lung ventilation devices to the Nadvirnyansky central regional hospital in Ivano-Frankivsk region. The head physician of the hospital Sergey Emelyanchuk thanked for the help, noting the need for it:

-Our hospital was supporting during the coronavirus epidemic, and we felt a shortage of medical equipment that saves lives. The Foundation has responded to our request for help.

On June 12, Starobelsk and Rubezhnoye received two ventilators from the Fund.

– This is the center of the Lugansk region. Patients will be brought here from all remote points. Our task is to provide doctors with everything they need. The Rinat Akhmetov Foundation donates such essential ventilators for our medicine. Thanks for this help. It arrived in a very good time. It is impossible to overestimate it, because it is impossible to assess the life or health of people who will be helped by this apparatus. Deepest gratitude to the Fund and all the doctors who work here, – said the head of the Lugansk Regional State Administration Serhiy Gaidai.

On June 16, the Rinat Akhmetov Foundation and FC Shakhtar presented two Monnal T75 artificial lung ventilation devices manufactured by Air Liquide Medical Systems SA (France) to the doctors of the Kharkiv Regional Clinical Infectious Disease Hospital. On the same day, the equipment was handed over to the doctors of Konstantinovka.

On June 17, the doctors of Myrnograd received three ventilators from the Fund, and on June 18, two ventilators were donated to the Mariupol emergency hospital.

On June 22, the Rinat Akhmetov Foundation and DTEK donated a modern artificial lung ventilation apparatus to the Lviv Regional Hospital for war veterans and those repressed by them. Yu Lipa.

– This is already the seventh ventilator donated by the Rinat Akhmetov Foundation and DTEK. They are extremely necessary, since there are many patients. COVID is not retreating. Therefore, thank you very much, – said the chairman of the Lviv regional council Aleksandr Ganushchin, accepting the equipment.

On June 23, a high-quality artificial lung ventilation device from the Rinat Akhmetov Foundation and DTEK was received by the Kosovo Central Regional Hospital in the Carpathian region.

– We are glad to have such a modern and urgently needed apparatus. We did not have such a high-class ventilator. Thank you,” said the hospital director Dmitry Mikityuk.

On June 24, the Kiev hospital of the Ministry of Internal Affairs of Ukraine received a modern artificial lung ventilation apparatus from the Rinat Akhmetov Foundation.

At the end of June, the Rinat Akhmetov Foundation began to issue to physicians working with COVID in the intensive care units of medical institutions that received ventilators from the Foundation, sets of special medical clothing, sewn for each doctor individually on a special order.

A new batch of ALV purchased by the Rinat Akhmetov Foundation for state hospitals has already arrived in Ukraine.