The Museum of Civilian Voices: stories that speak to the heart

The Rinat Akhmetov Foundation, within the framework of a unique project of the Museum of Civilian Voices continues to tell about the civilians of Donbass, whose lives were forever changed by the armed conflict. 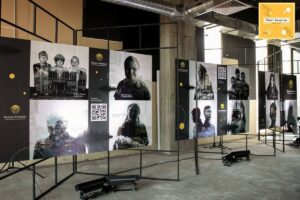 “Civilian Voices is an unprecedented online museum, which for the first time in Ukraine objectively and fully documents the stories of civilians who suffered as a result of the armed conflict in Donbass. This is a space in which the eyewitnesses of those events for the first time can share their personal story in public and thus free themselves from the burden of silence. The museum is a source of true stories of Donbass civilians, told in the first person, by the own voices of people who have gone through the horrors of the armed conflict. The museum is a window into which the world community can look to understand the feelings of civilians and form a fair idea of ​​the armed conflict that is in the very heart of Europe,” said Yuliia Yershova, Chief Communications Officer of the Foundation.

According to her, stories and collected materials are a unique base for historians, researchers, journalists, as well as for writing books, creating documentaries, feature films and other projects that will help preserve history as it is.

The heroine of a new story is Ilona Voitova from the village of Sopino. The woman thinks back how one winter day turned her life upside down.

“It was February 12th, battalions came in here. You know, it was so scary when a lot of military men suddenly appeared with weapons. When equipment, tanks – everything is lumbering. The military are walking in the village. One ran in and started shouting at me: “Why are you sitting here?  Get out of here!” I tell him: “Where will I go? My parents are 70 years old, I work as a nurse, I cannot leave. And if I leave, I will be the last to leave! How can I go and leave the village to the mercy of fate?” said Ilona Voitova.

She also remembered the terrible events of August 25, 2015, when heavy shellfire began at half past midnight.

“I grab a sleeping child in the bedroom, carry him in a blanket to the hall to the bed and lie down on top. I’m afraid that, God forbid, he will not be killed. Because we did not have time to do anything, neither get dressed nor put on shoes. Windows and doors were shaking on all sides. When I look at my youngest who was so lively, I see a kid who starts crying easily even if something minor happens. Of course, all this had a psychological impact on children. They remember everything. Now we are going to the sea in the summer, and the younger one says to me: “Mom, but before, remember, when there was shooting, we were already sitting in the basement, but now we are going to the sea, we are already used to it”. You get used to everything, because you will not constantly sit in the apartment,” says the woman.

The Museum of the Rinat Akhmetov Foundation is the first and largest collection of stories of Donbass civilians in Ukraine. Your story matters too! Tell it to the world! Follow the link https://civilvoicesmuseum.org/my-story  and fill in a short questionnaire to make your contribution to remembrance work.