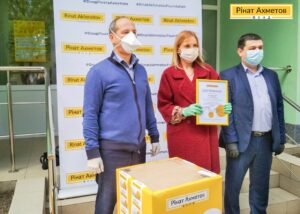 Alexander Voronkin, a DTEK representative at the regional headquarters for the fight against coronavirus, noted that to combat the COVID-19 epidemic, Rinat Akhmetov joined forces of the SCM group enterprises and the charity found. 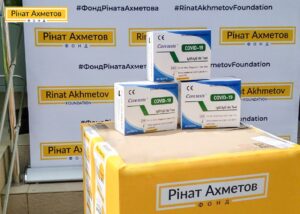 “The Rinat Akhmetov Foundation has allocated 300 million UAH to assist the regions in combating the pandemic, especially by purchasing and delivering equipment and protective suits. As part of the assistance, 300 thousand tests have already been transferred to the regions of Ukraine, 10 thousand of which were received by Ivano-Frankivsk region. These rapid tests are an important component of detecting coronavirus at an early stage. ”, added Alexander Voronkin.

Advisor to the head of the Ivano-Frankivsk regional State Administration, Lesya Krupyak, thanked the Rinat Akhmetov Foundation and DTEK for their contribution to the fight against coronavirus.

“We are confident that the interaction of government, business and society will help overcome this pandemic. I would like to note the importance of big business in countering coronavirus. In particular, the Rinat Akhmetov Foundation, which responded to the appeal of the country’s leadership and provides the necessary assistance. This batch of rapid tests is another help in the framework of cooperation. In addition, I thank the medical workers who do their duties during this difficult time. ”, said Lesya Krupyak.

The Rinat Akhmetov Foundation assisted medical ambulance workers in Ivano-Frankivsk region, long before the coronavirus epidemic. Last year, local medical workers became participants of the project “200 Ambulances for Ukraine” and received 10 ultra-modern special vehicles from the Foundation right away: five B-Type cars (“resuscitation on wheels”), one car designed for resuscitation of newborns and four Toyota Land Cruiser medical off-road vehicles. About how the Rinat Akhmetov Foundation helps Ukraine in the fight against coronavirus, read more in the review material here.