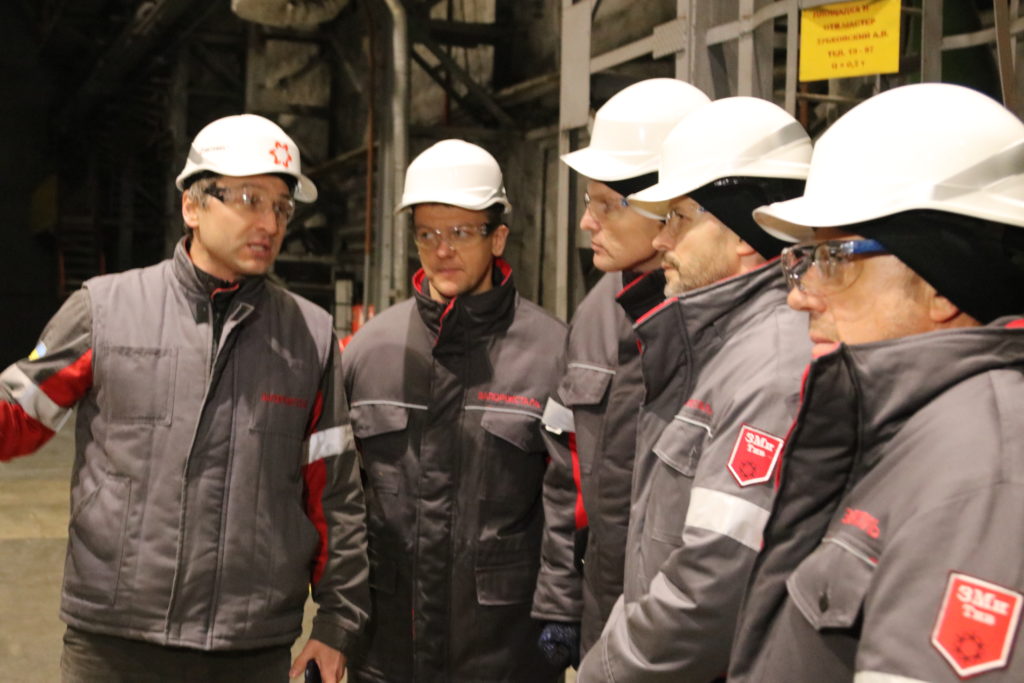 Alexander Mironenko, Acting Director General of Zaporizhstal Works, discussed with the representatives of the Austrian delegation the environmental solutions that were applied in the reconstruction of the pickling department of Cold Rolling Mill Shop No. 1. By virtue of the construction of a CPL-4 pickling line with a hydrochloric acid regeneration plant, the discharge of spent pickling solutions into the Dnieper River, as well as sulfuric acid vapor, has been completely stopped. The closed production cycle provides for the restoration and purification of spent hydrochloric acid with subsequent return to production.

The construction of the unique hydrochloric pickling line CPL-4 of Zaporizhstal was made possible in virtue of cooperation with Austrian partners and the involvement of the Austrian Control Bank (OeKB). During the meeting, prospects for further cooperation were also discussed.

“The cooperation of Austria with the Zaporizhstal Works has a positive result for the ecology of the city. We made sure that the closed-cycle production works efficiently without harming the environment,” said the Extraordinary and Plenipotentiary Ambassador of Austria in Ukraine Mr. Gernot Pfandler.

Looking back, since 2012, more than 10 billion hryvnias of “green” investments were allocated for environmental modernization of Zaporizhstal. Environmental decisions allowed significantly reducing the burden on the region and improving the environmental situation in the city. The largest of the implemented projects are as follows: a complete reconstruction of the gas-cleaning equipment of the sinter plant, which made it possible to reduce dust emissions by 90%, sulfuric anhydride by 50%. Complete ecological reconstruction of blast furnaces, with the construction of a new blast furnace No. 3. Launch of metallurgical waste processing complexes ALTA and AMKOM, which allow annually reducing the volume of metallurgical waste and returning hundreds of thousands of tons of iron-bearing formations to the production process. In 2019, the Works put into operation a modern complex for intercepting industrial storm water, which reduces the discharge of industrial water into the Dnieper by 5 million m³ per year.