THE ECONOMIC ADVISER OF THE USA EMBASSY: “THE” ZAPORIZHSTAL» STEEL WORKS IS AN EX-AMPLE OF SUCCESSFUL REFORMS FOR ALL UKRAINE

On March 18th, 2015, the delegation of the USA embassy in Ukraine composed of Economic Adviser Chip Lajtinen and the Second Secretary Christopher Greller has visited “Zaporizhstal” Steel Works within the limits of working visit to Zaporozhye.

The representatives of the USA embassy have been acquainted with industrial activity of the «Zaporizhstal» Steel Works and with those changes, which took place at the Steel Works for the last three years. 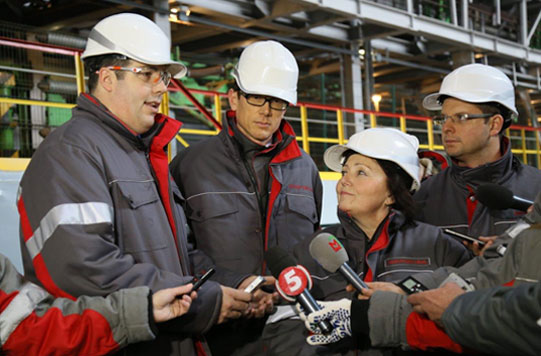 At a meeting with representatives of the American embassy, the CEO of the «Zaporizhstal» Steel Works, Rostislav Shurma has told about the work of the Steel Works in present condi-tions: «We continue to invest in modernization of our production. In 2014 our investments became the largest among all regions of Ukraine – we have invested around USA 120 million dollars in technical modernization of the Steel Works. Today our Steel Works is one of few enterprises of Ukraine that in the most complicated economic conditions, continues not only to work but continues to develop, increase volumes of production».

In its turn, Chip Lajtinen the Economic Adviser of the USA embassy, has thanked Rostislav Shurma for possibility to be acquainted with activity of the enterprise and has noted: «the suc-cessful reforms and the positive changes occurring at the enterprise are an example of that, which now should be present throughout Ukraine. In the most complicated economic situation in which Ukraine is now, the «Zaporizhstal» Steel Works is the sample of the industrial enterprise, which not only keeps stability of work, but also successfully develops, invests in modernization, looks for the new markets and maintains competitive ability». 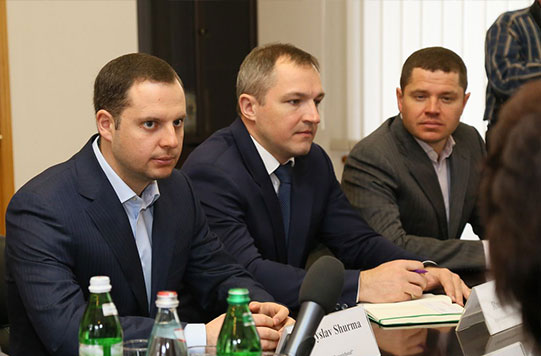 During the visit to the enterprise the delegation of the USA embassy has been acquainted with two large investment projects, which were realised in 2014: a continuous pickling line (NPL-4) in the Cold Rolling Shop No.1 and with the Blast furnace No. 4. The projects along with introduction of modern industrial technics have a serious ecological component. For example, new line NPL-4 completely eliminate disposal of process waters into the river Dnieper from the Cold Rolling Mill Shop No.1, and also reduces emissions of sulphuric acid fumes in atmosphere on 83 %. The Blast furnace No. 4 reconstruction has included implementation of aspiration systems equipment at the casting yard and at the furnace stock house that has considerably reduced atmospheric emission. Investments into these projects compose about 1, 5 billion UAH.