On March 11, 2020, as part of a working visit to Zaporizhzhia, Zaporizhstal was visited by a member of the board of JSC Ukrzaliznytsia Frantisek Bures. Zaporizhstal General Director Aleksandr Mironenko discussed with the delegation the prospects for cooperation in updating rolling stock and sharing experience in implementing lean manufacturing tools. 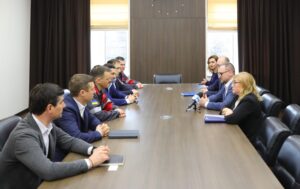 Recall that since 2017, within the framework of the program for the modernization of the locomotive fleet, Zaporizhstal has been carrying out re-motorization of the rolling stock of the enterprise. During this period, in partnership with the Nikolaev and Zaporizhzhia diesel locomotive repair plants, five diesel locomotives of the TGM-4 series were re-motorized. For these purposes, Zaporizhstal allocated more than 50 million hryvnias. The sixth diesel locomotive was completely updated with the company’s own resources, for which the Works allocated 7.4 million hryvnias.

The project proved its effectiveness: fuel consumption was reduced to 12%, engine oil consumption – up to 60%. By replacing the engine with a more modern one, manufactured by Cummins (USA), the concentration of CO and nitric oxide in the exhaust gases has been significantly reduced.

A round table was also held at the Zaporizhstal Works on the functioning of the Integrated Management System and the implementation of lean manufacturing tools. Among the participants there were representatives of Ukrzaliznytsia, the Lviv Railway, the Lviv Locomotive Repair Plant, and others. Members of the delegation noted the high level of implementation of lean manufacturing practices at the Works.

Note that according to the results of 2019, within the framework of the operational improvement program, Zaporizhstal achieved more than $ 36 million in savings.

Previous Post Zaporizhzhia Enterprises of Metinvest have Joined the All-Ukrainian Project “Greening of Ukraine” Next Post The Rinat Akhmetov Foundation Urgently Purchases 20,000 Rapid Tests for the Detection of Coronavirus and Passes it to the Ministry of Health