OSTAP SEMERAK, THE MINISTER OF ECOLOGY WAS ACQUAINTED WITH ECOLOGICAL MODERNISATION OF THE “ZAPORIZHSTAL” STEEL WORKS.

On June 3rd, Ostap Semerak, the Minister of Ecology and Natural Resources of Ukraine, during visit to the «Zaporizhstal» Steel Works was acquainted with modernisation of the Steel Works production, which is directed on improvement of ecological situation in the region. All actions of ecological modernisation of the Steel Works are realized according to the Tripartite agreement between the Ministry of Ecology of Ukraine, the Zaporozhye region council and the PJSC «Zaporizhstal». 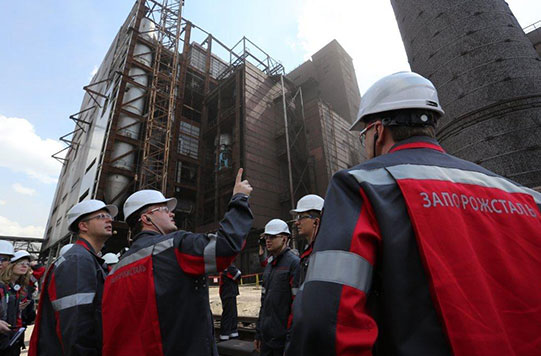 The minister has visited main objects of modernisation of the Steel Works production: construction of gas purification systems at sintering machine No.5, as well as gas purifications at sintering machines No.1-4, which are already in operation. Ostap Semerak has familiarised with operation of aspiration systems at casting yard and stock house trestle bridge of the Blast furnace No.4. He has visited the line of hydrochloric acid pickling in the Cold Rolling Shop No. 1 (CPL-4). Realisation of this ecological project has allowed to stop completely emissions of sulphuric acid fumes and discharge of process waters into river Dnieper.

«During modernisation each updated aspiration system, gas purification is equipped with sensors of continuous automatic control, and all indicators are fixed. History of emissions and operational efficiency of gas purifications can be observed in online mode. It allows us effectively to build up production process and to reduce negative influence on environment. We introduce the best world experience», – has noted Rostislav Shurma, CEO of PJSC “Zaporizhstal”.

«That, we have seen at «Zaporizhstal» Steel Works, infuse certain optimism, these are positive things, which lead to reduction of emissions. Nevertheless, the road, which we together should pass for improvement of ecological environment in Ukraine, is long enough. We have the Trilateral Agreement, which is concluded between the «Zaporizhstal» Steel Works, the Ministry and local authorities. This Agreement is very ambitious, very capacious financially, but it is aimed at improvement of ecological situation not only in Zaporozhye, but also in the whole region. We should confidently hang one another, each party of our common work, for the purpose not to drop out of schedule, but be ahead of schedule», – stated Ostap Semerak, the Minister of Ecology and Natural Resources of Ukraine during visit to the «Zaporizhstal» Steel Works.

At present, the «Zaporizhstal» Steel Works continues realisation of the project on ecological modernisation of the Sintering plant: active construction of gas purifications at sintering machines No.5-6 is going on. Investments of the Steel Works into erection of new gas purification systems at all six sintering machines will compose more than 870 million hryvnyas. In priority of ecological modernisation at the Steel Works is decreasing of emissions share, which negatively influence on environment: dust, sulphurous anhydride (SO2), other emissions.