According to Decree of the President No 300/2016 dated July 16th 2016, four employees of the PJSC “Zaporizhstal” by Day of workers of the metallurgical and mining industry are awarded by the state awards and titles

Sergey Lysokon, Deputy Head of the Blast Furnace Shop and Igor Kovtunov, the sinter machine operator of the Sinter Shop are awarded by the “The Order of Merit” of the ІIІ degree. Jury Nedviga the steelmaker of the Open Heath Furnace Shop and Oleg Maystrenko, the operator of pickling line of the Cold Rolling Shop No.1 are awarded by honorary title of “The honoured metallurgist of Ukraine”.

Konstantin Bryl, the Chairman of the Zaporozhye regional state administration has handed out merited awards to the Zaporizhstal employees on July 28th, at regional council session. 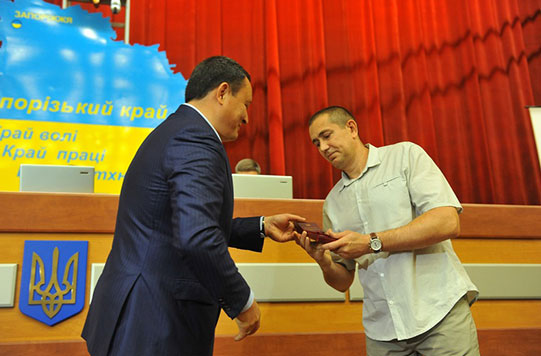 “Creation and development – these important human values are combined in honourable work of metallurgists. The mining and metallurgical complex and national economy as a whole keep going thanks to high professionalism of the metallurgists, devoted to favourite profession”, – pointed out Rostislav Shurma, the General Director of PJSC “Zaporizhstal”