On April 21, 2021, a modern oxygen station was commissioned at Zaporizhzhia Regional Infectious Diseases Clinical Hospital, the construction of which was financed by “Zaporizhstal” Steel Works of Metinvest Group with the support of Rinat Akhmetov Foundation. The Steel Works also provided the station’s tanks with medical oxygen of its own production, which “Zaporizhstal” transfers on a free basis to doctors in Zaporizhzhia and other regions of Ukraine. 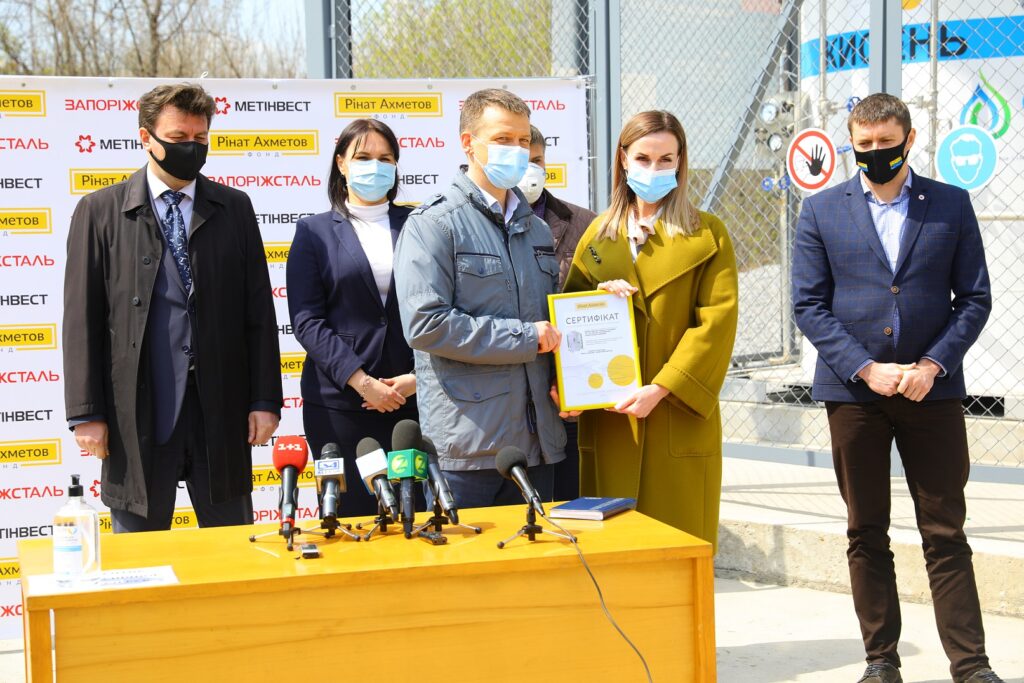 “Doctors need help no less than the patients they save. Together with Rinat Akhmetov Foundation and Metinvest, since the beginning of the pandemic, we donated protective equipment, test systems, and ventilators to doctors. Today is a significant date – a new oxygen station, the construction of which we financed, is fully ready for operation in the regional infectious diseases hospital. We have filled the capacity of the station with medical oxygen produced by “Zaporizhstal”; now thousands of people are treated with it in Zaporizhzhia, Kiev, Dnepropetrovsk, Nikolaev and Khmelnitsky regions,” – said Aleksandr Mironenko, General Director of “Zaporizhstal”.

The Steel Works financed the creation on a turnkey basis of a vital oxygen station: according to the hospital’s requirements, design estimates were drawn up, two modular gasifiers with a volume of 5 m³ each were installed, oxygen routes were laid through the hospital territory to each oxygen point on the 2–5th floors of the hospital. The station is equipped with an emergency control system for leakage and oxygen concentration, emergency fire alarms. Social investments in the construction of the station amounted to UAH 6 million.

Oxygen equipment has been fully transferred to the hospital’s balance sheet and will provide oxygen to 104 beds on the 2-5th floors of Zaporizhzhia Regional Infectious Diseases Clinical Hospital.

“Zaporizhzhia region is in the red zone, today there are more than 800 cases per day. The occupancy of beds in medical institutions today is 55%, in the regional infectious diseases hospital – almost 80%. We are grateful to the doctors who are at the forefront of the fight against the disease. It is crucial that the knowledge and skills of our doctors are supported by proper technical support. The new oxygen station is an example of interaction and partnership between socially responsible business and the community. I would like to thank “Zaporizhstal” of Metinvest Group and Rinat Akhmetov Foundation for a modern oxygen station for residents of Zaporizhzhia region. I am convinced that it will save hundreds of lives and will work, helping doctors do their work. This is a vital issue – for people, the health care system and for the economy of the region as a whole,”- said Aleksandr Starukh, the chairman of Zaporizhzhia Regional State Administration.

Let us recall, that, in Zaporizhzhia, medical oxygen from “Zaporizhstal”, licensed by the Ministry of Health as a medicine, is received by seven medical institutions: city hospitals No. 1, 2, 6, 7, 9, city children’s hospital No. 5 and maternity hospital No. 4.

In 2021, Metinvest Group celebrates the 15th anniversary of its foundation. Metinvest is an international vertically integrated mining and metallurgical group of companies. Its structure includes mining and metallurgical enterprises in Ukraine, Europe and the USA, as well as a sales network in all key regions of the world. The company controls the entire production chain – from the extraction of ore and coal to the production of semi-finished and finished products.

Previous Post
“Donbass and Civilians”: Stories That Touch the Soul
Next Post
Metinvest will Act as a Strategic Partner of the Khortytsia National Reserve Development Project