With the financial support of Zaporizhstal, on the Khortytsya island an underwater archaeological expedition was conducted to raise a land artillery carriage of the 17th-18th centuries from the bottom of the Dnieper River. The archaeological find is unique in its kind and has no analogues in Ukraine.

An old artillery carriage was discovered in the Dnieper river, near the village of Belenkoye, Zaporizhzhia region, by a famous archaeologist, head of the restoration department of the Khortytsia National Reserve Valery Nefedov. On November 22-23, 2020, with the financial support of Zaporizhstal, the members of the expedition of the Khortytsia National Reserve, divers and employees of the State Institution of Emergency Situations of Ukraine in the Zaporizhzhia region, carried out underwater archaeological work at a depth of about 10 meters.

“It is impossible to imagine Zaporizhzhia without its glorious history, because it is the basis of the nation’s self-identification. Support for the historical research of the native land is very important, therefore Zaporizhstal financed the expedition and helped to obtain an extremely valuable historical artifact – a carriage of the 17-18th century. The past hides a lot of the unknown, and each discovery of the historians of our native land brings us closer to understanding our ancestors and better understanding ourselves, ” said Aleksander Mironenko, General Director of Zaporizhstal.

The artillery carriage is a wooden frame bound with iron, designed to secure the barrel of a gun weighing about 2-3 tons. The carriage length is 4.4 m, the width is 2.3 m. On the body of the artifact there are various fittings, cotter pins, brake elements for aiming the weapon. 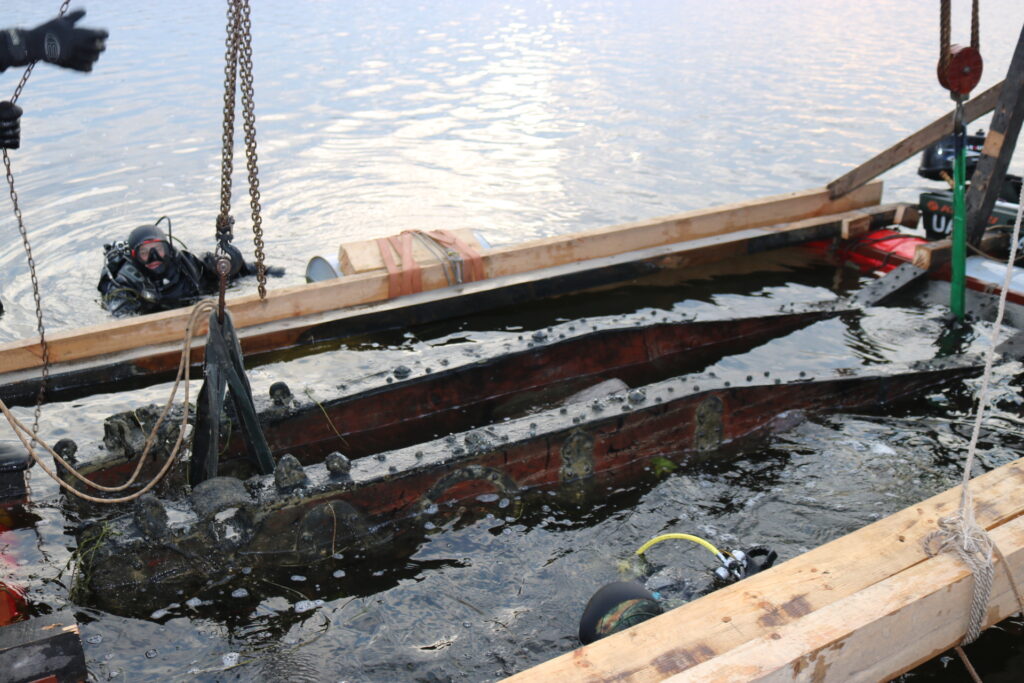 Historians speculate that the carriage served as a support for a powerful siege cannon up to 32 pounds in caliber, and could have been used in military Cossacks’ campaigns in the 1730s. It should be noted that in the entire history of underwater exploration of Khortytsia, no such artifact was previously found. This find is unique not only for Zaporizhzhia, but also for the whole Ukraine; a few such memorials are kept in museums around the world. After being lifted, the historical find will undergo a large-scale restoration and subsequent conservation.

Let us remind you that Zaporizhstal systematically supports cultural and historical projects of the Khortytsia National Reserve. In 2005, Zaporizhstal became the general investor of the “Revival of Spirituality: Creation of a Historical and Cultural Center and a Monumental Complex on the Khortytsia Island” project, which resulted in the construction of a historical and cultural complex “Zaporiz’ka Sich”. In 2013, in the historical and cultural complex ” Zaporiz’ka Sich”, with the support of the Works, a new exposition object “Military Cannon” was opened. In 2015, the Works financed the creation of a new exhibition of the military art of the Zaporizhzhia Cossacks “Cossack camp”, and in 2016, the joint exposition “Chasy Cossats’ki – Sichi Zaporiz’ki”. In 2017, Zaporizhstal helped to equip a new tourist facility – a Bronze Age sanctuary. In 2017, in the building of the new Museum beyond the rapids, opened with the financial support of Zaporizhstal, the exhibition “How Kharytyna Marchenko built the DnieperHPES” was created. In 2020, the Museum presented a new exhibition “De ye boi – tam є heroi (where there are battles –there are heroes there). Devoted to the Ukrainian Cossacks”.