According to the program for the modernization of production facilities, Zaporizhstal updated the crane fleet of the enterprise – two railway cranes with a lifting capacity of 25 and 80 tons were delivered to the Works. Investments in the purchase of lifting equipment amounted to about 62 million hryvnia. 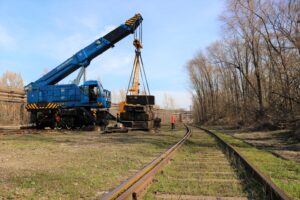 New cranes will be involved in the loading and unloading of technological cargoes and raw materials, construction and installation works, maintenance and overhauls of Zaporizhstal workshops and Zaporizhzhia Metinvest enterprises.

The equipment of the crane with a lifting capacity of 80 tons with a folding telescopic boom will enable it to be used in the performance of work in the cramped conditions of an existing industrial site. Cranes are completely self-propelled and autonomous: they can be moved without the involvement of locomotives. New equipment will complement the Zaporizhstal fleet, which includes 24 railway cranes.

Let us recall that the Works has been implementing the program for the modernization of the rolling stock of the enterprise since 2017. During this period, in partnership with the Nikolaev and Zaporizhzhia diesel locomotive repair plants, as well as the Works’ own forces, six diesel locomotives of the TGM-4 series were motorized. For these purposes, Zaporizhstal allocated more than 57 million hryvnias.